This conference was attended by 2000 people.  The plenary was set up as a debate with Peter Kareiva (USA), chief scientist for the Nature Conservancy and advocate of a ‘New Conservation’ that allies with corporate interests and neoliberal market mechanisms.  The two talks were about 20 mins each. Kareiva went first and was followed by Spash Environmental Values in Conservation: Ethics, Economics and Pragmatism (PDF external link, free to download) . The response of the audience was overwhelming in favour of what Spash said with a spontaneous standing ovation from the conference floor.  Here is some of what the people said at the time and shortly after, as posted on the conference Tweet site. 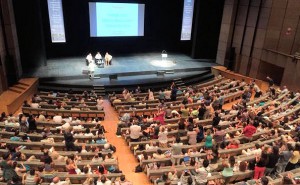 Al/ex/a/ndra Sutton @aesutz
At the International Congress on Conservation Biology, watching Peter Kareiva get his ass handed to him by Clive Spash. #wishihadpopcorn
7:47 PM – 3 Aug 2015

Lauren A Bailey @LaureoftheWild
And now we all know his name. Clive Spash won over the room and got standing ovation in debate with Kareiva. Amazing #@ICCB2015
8:06 PM – 3 Aug 2015

Eveliina Kallioniemi @EPaivikki
One of the most thought provoking and hilarious plenaries ever by Spash & Kareiva at #ICCB2015
10:16 PM – 3 Aug 2015

Paolo Strampelli @Strampelli
Amazing debate session at #ICCB2015 thanks to #CliveSpash. Inspiring to see someone receive a #standingovation halfway through a debate.
11:26 PM – 3 Aug 2015

Emma Bush @er_bush
Massively enthused by the excellent critical debate over the “New Conservation” this eve from Kareiva and Spash. #ICCB2015
12:03 AM – 4 Aug 2015