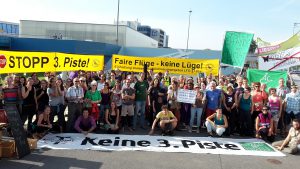 A key aspect of the Austrian Climate Camp has been to protest against expansion of Vienna Schwechat Airport. After the first camp the Austrian courts decided that a third runway must not be built, because: (i) the impact on greenhouse gas emissions and (ii) due to the loss of farmland involved would erode future food production potential. However, the major Austrian political parties (left and right) then contested and complained about the court ruling because they believed it would prevent economic growth. Meanwhile the Greens remained mute, despite officially being against the expansion. Proposals were then put forward to change the constitution to protect economic interests against such judicial rulings that might protect land and the environment. A group of academics responded with a petition against the proposed constitutional change (PDF in German).

Meanwhile the airport has judicial proceedings underway to appeal against the decision in a higher court. Like other airports (such as Heathrow) they argue expansion reduces aircraft waiting times, and so fuel consumption and noise. The fact that the aim is to increase the scale of air traffic is ignored, along with the need to not just reduce and offset emissions but to reduce flying in line with the need to cut greenhouse gas emissions by at least 80%. In contrast the international airline industry wants 700% expansion by 2050. 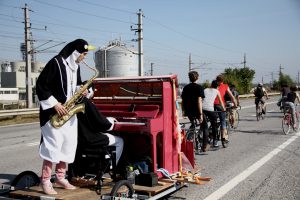 In 2016, I joined the mass of protesters cycling from the centre of Vienna to the airport along the main roads. There was music along the way including jazz played by a pianist and saxophonist on a bike trailer pulled along by a trandem courtesy of Cycle for Change, Vienna. At the airport there was music and speeches by local community members who have been fighting the airport for years. A medical doctor reported on the local health impacts including those from the massive kerosene burn on flight take-off.  I gave a short speech on the economics of airports. 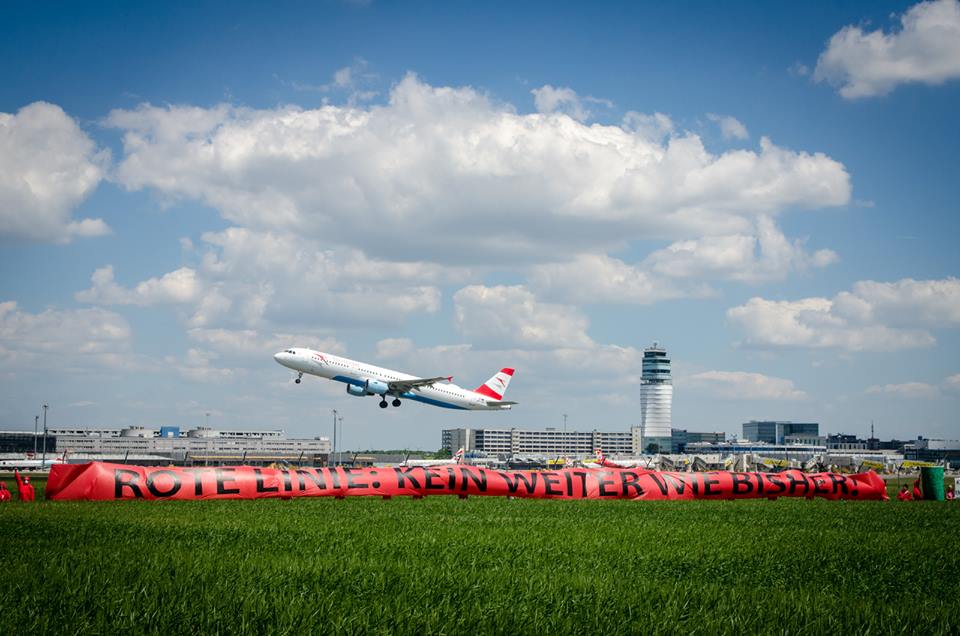 In 2017, I took part in the protests organised by Systems Change Not Climate Change. This involved the metaphor of ‘drawing a red line’ that cannot be c 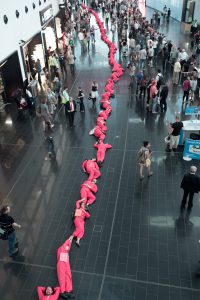 rossed, namely no more airport expansions. Activists rode bicycles around the airport perimeter dressed in red suits and were accompanied by musicians of SambAttac and Rhythms of Resistance. On the perimeter a long banner was held up in front of planes taking-off from the airport (see photo above).  On arrival at the airport there were speeches, music, dancing and distribution of leaflets.

Despite the police and security forces, activists later conducted a peaceful civil protest in the arrivals terminal for 35 minutes by forming a red line of human bodies. The airport protests were reported on TV and in the press.