The Austrian Climate Camp was established in 2016. The Camp is organised by the Austrian group Systems Change Not Climate Change. It runs for 5 days with a variety of events which have included protests at Vienna airport (see below). The camp aims to provide a place to connect 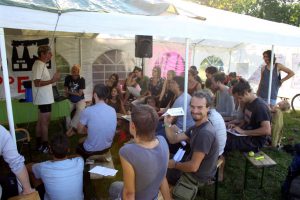 with like minded activists, exchange ideas and strategies, have fun, learn and grow.

A community kitchen provides food for a suggested donation. Power in 2017 was supplied by solar and a self constructed wind turbine. The electricity is used for a sound system and some minimal lighting.  Live music and performances are provide free of charge by a range of  bands.  In the evening people gather around log fires. There are dry toilets and a showering facility, as well as the option of a dip in the local (rather cold) river.

I was present at both the 2016 and 2017 camps speaking and running discussion groups.  I entitled my 2017 workshop and talk “The Biophysical and Social Reality of the Economy and its Implications for Climate Change and Flying”.  I started with some basic understanding of the role of fossil fuels in the economy. I put the biophysical reality of the current economic system in context and showed how the Paris Agreement relies upon some fantastical technological ‘solutions’ rather than systemic change, behavioural modification and ecological transformation. The aim was to help the audience understand how continuing to fly is not a possibility for anyone seriously concerned about stopping human induced climate change.