2021 United Nations, Sustainable Development Goals, International Conference, Bergen, Norway
Doughnut Economics: A Round-table with Kate Raworth. Plenary. This was the opening event, for the two day (online) conference, with Kate Raworth giving a talk (32 min), followed by three short commentaries in order: Clive Spash comment, then Aili Keskitalo (President of the Sámi Parliament) and Vilde F Ruud (political science student at Bergen). There was then a reply by KR (10 mins). I was then asked a question and had a further chance for a short response to KR by myself (5 min) and comment by Aili (2 min). The rest of the round-table is not covered, but the full event can be found here on a Bergen University website. A pdf is available of the transcript of my comments. They need to be read in the context of the presentation and the response by Kate to which my first and second critical commentaries are directed respectively. A related written set of critical remarks on Kate Raworth’s approach can be found in my paper Apologist for Growth (free pdf external link), see especially section 4.3 ‘Do nought economics: the passive revolutionary’. 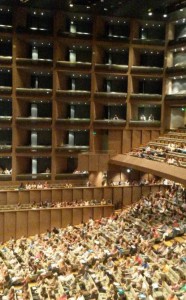 Venue: Montpellier Opera house with 7 stories and a 2000 strong audience of conservation biologists

2015 International Congress for Conservation Biology, Montpellier, France
New Paths for Conservation: A Debate with Peter Kareiva and Clive Spash Plenary. This event involved a talk by Kareiva followed by my own and then a debate in which we answered questions from a moderator.  My lecture was a critique of the neoliberal ‘New’ Conservation as promoted by Kareiva and others.  The 2000 strong audience gave it a standing ovation (click here for audience comments).  Unfortunately, there was no video or recording by the organisers (a major oversight), but a low quality sound recording was made by a member of the audience, and this has been transcribed.  The “Peter Kareiva vs. Clive Spash” chaired debate was also recorded and a transcript of that will appear here in due course.
“Environmental Values in Conservation: Ethics, Economics and Pragmatism”
Lecture Overhead Slides (PDF)
Transcript with Slides as Appendix (PDF free to download, external link )

2014 International Conference on Degrowth, Leipzig, Germany
“Degrowth for Ecological Sustainability and Social Equity”. My roles: Scientific committee, workshop organiser/facilitator, presenter and debate. Workshop on “Exploring Transformation to a Radical Alternative Gesellschaft: Economy, Ethics, Ecology”. Presentation “Values and Ethics in an Alternative Degrowth Society”.  Semi-plenary and debate with Nico Paech. The session was called: “Scenarios for a Post-Growth Economy”.  The lecture theatre was packed and people were being turned away at the door.  My talk was entitled  “A Future Social Ecological Economy: Reality-Transformation-Utopia” and was well received.  On Vimeo there is a video of the talk and the debate [click links].

2010 Austria, Bank of Austria, Vienna
“Bulldozing Biodiversity: How to Trash Ecosystems Efficiently”. Public lecture held on Bank premises. The talk was videoed and simultaneously translated into German. The message was probably not well received by the bankers present and the video never appeared through their website.  The sustainability officer finally released a copy after over a year of internal ‘problems’. There is a copy of the talk on Vimeo in English and German; also you can click here for overheads of the talk as a pdf.

[Under construction. More to come…]