Citations have become a key measure of academic performance, especially with the rise of government research assessment exercises and the “accounting culture” of management. The modern academic “publish or perish” imperative, formerly an American phenomena, has been reinforced and spread by this means. (See also the editorial Spash, (2008) A worthwhile academic life (external link). Environmental Values 17(2): 121-124.)

Unfortunately, the focus has been rather exclusively on peer reviewed journal articles. Clearly a good book takes much longer to write than several journal articles. Books, and such things as the EVE Policy Briefs, are then commonly seen as a waste of time. Similarly, community contributions (such as active editorial roles, running societies or production of edited volumes) while taking much time, may produce little or no citable “products”. A range of academic activities are now often actively discouraged by some Heads of Department and university administrators. As part of an accountancy culture, excessive emphasis on a citations rating can therefore have serious negative consequences.

This culture has also inevitably influenced how some individuals operate. Academics are being offered incentives to play a rent seeking game whereby they make little or no community contribution (e.g., editing, reviewing, refereeing), while only helping others if the result is co-authorship of a peer-reviewed journal article. There are those who buy into this, seeking the kudos of citations without too much effort on their part.

There is then the potential for abuse of power and exploitation. Helping junior colleagues write their first papers, or mentoring PhD students, was at one time just part of the job and an insufficient reason for an academic to add their name to the work. These days, some academics use their position to get their names put on articles after merely acting as external examiners for a student’s PhD dissertation! People acting as referees for journals have also been known to use this role to get their names on papers they were meant to be impartially (and anonymously) refereeing. Such abuse may be limited, but seems to be positively encouraged. Personally, I avoid co-authoring work unless I feel my contribution has been substantive. I also need to agree with the content.

There is a clear power imbalance in the supervisor-student relationship that some will exploit. For example the professor who tells PhD students that they cannot graduate without co-authoring a paper with them. In this case I know a supervisor who happily puts their name on work to which they have made no contribution at all. In my opinion this is pure abuse of power and totally unethical.

Another problem resulting from the accountancy culture is the publication of the same piece in two (or more) different journals to boost publication numbers. In theory this should not occur as authors normally declare their work is original. Occasionally this may happen where editors are keen to get an authors work on a subject and not so worried about originality; something more likely for those with standing (e.g., senior academics, Nobel laureates, those in the media spotlight). Yet there are also those who strategically use excessive repetition so that you see two, or even three, articles with exactly the same data, argument and conclusions (they usually change the title and, in multi-authored works, the order of authorship). Publication pressure also means well intentioned younger academics may splice a perfectly good article in two, and produce a couple of inferior works, on the basis that two is better than one.

A possible indicator of the errant author is publishing numerous multi-authored works. The Professor in the above example of power abuse had, in their entire career, only published two single authored refereed journal articles. Of course good team work and collaboration can also achieve good multi-authored work. The problem is then knowing exactly what an individual has in fact contributed, i.e., are they a good team player or a “successful” rent seeker taking a free-ride on the backs of others?

A difference between natural and social sciences is worth noting here. Natural scientists have tended to work in teams and/or labs where the norm is that all get credit for any outputs from any members. The team leader appears last of the often long list of team members. In contrast, social scientists have tended to work alone or with one or two co-authors. Principle authorship is designated by who appears first. Where authors appear alphabetically the assumption is that contribution is equal. 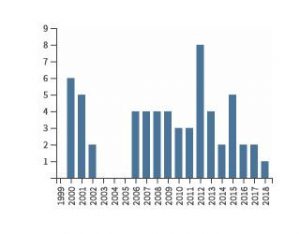 The main source for citations information is the Web of Knowledge website (external link). However, this only reflects registered journals and even for those often fails to have a complete backlog. For example, this means about a dozen of my peer reviewed journal articles fail to appear in the WoK statistics, although their coverage has been expanding. In addition they take no account of book chapters, edited volumes, books and so on. For example my cost-benefit book has over 1500 citations in Google Scholar (as of 2015) but makes no appearance in WoK information. The WoK data is also a crude count that ignores the number of co-authors, which restricts its usefulness for interpersonal comparisons. In addition the graphs provided include self citations which will tend to inflate figures in years when authors are publishing a lot of articles. Thus, the data from WoK is a limited reflection of overall writing and academic contribution. 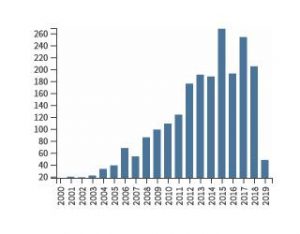 Still the data does give a useful, if crude, base for considering how work is going and the impact in a wider community. The two graphs accompanying this text are from the WoK database for my work (as of April 2019). The first is the number of items registered in the database given by year of publication. The second is the total number of citations in a given year to all the items registered on the database. The items registered include: journal articles, editorials and book reviews. My citations come mostly from journal articles, although some of my editorials are also quite popular and get increasingly cited.

Works Cited in the WoK Database

Below is a list of all those publications at present (May 2020) receiving 10 or more citations. They are ranked from highest to lowest.

24 Cites. Clive L. Spash and Iulie Aslaksen (2015) Re-establishing an ecological discourse in the policy debate over how to value ecosystems and biodiversity. (PDF) Journal of Environmental Management 159 (August): 245-253.

I also compiled my own data on publications from 1989 to 2009. This extended coverage to more of the items listed and/or available elsewhere on this site, and included items not in the WoK registration system. The results are shown in the figure below and give a more detailed and complete picture of activity.

My first peer reviewed journal article was a one-off written in 1989 whilst in the midst of my PhD. After that, there is a clearer build-up of works. The peak in 1994 was due to the production of discussion papers arising from both my PhD, completed the preceding year, and outputs from various research projects of the early 1990s. The peak in 2000 shows the eleven EVE Policy Briefs (available on this site), which involved considerable effort by myself and Claudia Carter both as editors and authors. The most recent peak in 2009 is due partially to various journal articles reappearing in collected works as reprints and the completion of my edited four volumes on Ecological Economics each of which includes an introductory chapter.

The gap in activity in the early 2000s corresponds to that in the ISI data but is less stark. At this time I took a job in Aberdeen which involved building-up and running a research team of some twenty staff. I effectively became a full-time manager and administrator. The gradual rebuilding of my research can be seen as I left administration in 2005 and started a new job in 2006.

In 2009 while working in Australia I was involved in a case of banning and censorship relating to my work on carbon emissions trading. This eventually led to my resignation in order to prevent on-going attempts at stopping the release of information of public interest. The issue was particularly time consuming. (Figures for 2010 were projections on the basis of works completed in 2009 and forthcoming).