At the 2019 climate demonstrations (May 31) in Vienna special units of the riot police were present. The protestors had occupied a street intersection (see separate posting).  There were a few aggressive initial arrests on pushing back the crowd from the main demo.  The anti-SUV demo had occupied a crossroad so cars could not pass.  After some time the police began arresting the protestors, who were by then sitting on the ground in the road forming a large circle.  They carried them away, one by one, a short distance behind a line of police vans and awaiting officers, to be searched and then transported to a police station.  Behind the vans the detained protestors were largely out of sight of onlookers and the public.  In this process, some of the handling of protestors was unnecessarily aggressive with violent incidents and injuries to protestors. One incident captured on video was reported as shockingly brutal by the press (still shots from the incident here).

In particular, members of the Vienna riot police Einsatzeinheit (EE) were alleged to have engaged in extreme violence.  Officers of the young and inexperience Bereitschaftseinheiten (BE), or stand-by unit, were also present at incidents.  BE units are called in as back-up during demonstrations classified by the police as peaceful.  The motto of EE Vienna with the call name “ULAN”, or U for short, is Viribus Unitis meaning: ‘by joining forces’ or ‘with combined force’ (a personal motto of Austro-Hungarian Emperor Franz Joseph I and name of one of his battleships).  Various members of sub-unit U33 (those with designation U330 on back of the uniform: ULAN 3rd Division, Group 3) appeared in videos (see Twitter) causing pain and suffering to protestors.  Several protestors were injured and some hospitalised due to police actions.  The police made claims of ‘resisting arrest’, which appear as a rather thin veil of defence for their aggressive acts against peaceful protestors. 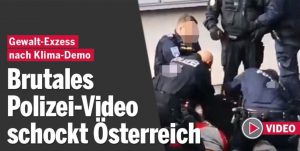 In one particularly nasty incident screams were heard and members of the public rushed over to the police vans. Pictures and a video managed to capture U33 police men and women with an apparent ‘ringleader’ beating-up a protestor. While his colleagues hold down and sit on top of the protestor, who has his/her face pushed into the pavement, the bald ringleader repeatedly punches him/her on the back and spine.  One of the officers shouts (in German) to hit the protestor “in the kidneys”. The surrounding police men and women (from U33, BE81 and Zugskommandants from BE 5th Division [BE50] and Gruppenkommandant BE 8th Division, Group 1 [BE81]) are seen turning their backs or looking on, and do nothing to stop the violence. Instead they provide cover and try to stop anyone seeing what is happening. However, the person who took the video was not stopped before capturing the atrocities. While the violence was still going on, a Gruppenkommandant (group commander) from BE81 points out the person filming to his subordinates and orders them to block the recording. This BE81 Gruppenkommandant was present from the start of what the news called a brutal and shocking incident.  The same group of police officers appear in other aggressive actions. One video captures the BE81 Gruppenkommandant smiling, after the incident, to those of U33 involved in the incident.

The widely covered brutal and shocking attack was only one incident of several.  I personally know of a young undergraduate student protestor who had his head smashed into the pavement by officers, several of whom then sat on him and his head, while he was face down.  His face was cut, bruised and bleeding.  He is a totally passive person.

Early in the police action another protestor was grabbed (probably by the WEGA, special riot force), thrown to the ground and sat on by two police officers. They then placed his head under a police van in front of the rear wheel. The van then started to move forward. The policemen pulled the protestor away from certain death at the last second. Video footage here. In other footage of the same event (see here) the presence of WEGA is evident, and the BE81 Gruppenkommandant also appears, this time bending the persons arm behind their back after the near death experience (see also still shots bottom of page here). 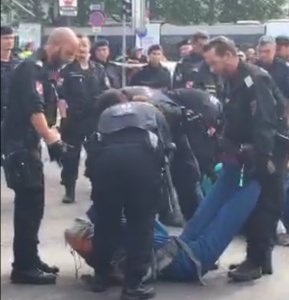 Another incident involved some of the same U33 police officers as captured in the assault video.  Three officers are lifting away a demonstrator whose arm appears to being twisted in the process, the person screams and the officers drop the person who is knocked unconscious by the fall. A bald officer takes the shoulders of the person, lifts him/her up with another officer grabbing an arm and another the legs. An unconscious person, after such a fall, could be suffering injury to the neck, head or spine, but the U33 officers pay no attention to this. They fail to seek medical aid, or protect the person neck, and continue to roughly handle the person despite the potential for serious injuries (see video from 5 min 10 secs).

U33 officers are also involved causing leg injuries on at least two occasions, both involving the same bald policeman. In one case a female protestor with a large rucksack is forced to march forwards while a female officer pulls her rucksack backwards, the result is that the protestor twists her ankle.  The police officers then force her to walk on the injury. As she struggles to walk the bald U33 officer appears to deliberately kick her injured ankle and then knock her other leg from under her, forcing all her weight onto the injured ankle, so she falls. See the video here from 2.55 mins. In the other recorded incident a man has sustained a similar injury from police action and is forced by two U33 officers (one the bald policeman) to walk on the injury despite his screams of agony. See the video here from 11.25 to 11.35.

Some police officers clearly disagreed with the actions of the others and look uneasy at what is going on. At one point there was even a scuffle, and some fist fighting between two police officers, who are then held back by their colleagues. Eye witnesses reported this as being about allowing filming. Possibly this police fight was a result of the brutal and shocking incident that was filmed.

The activists of ‘Systems Change not Climate Change’, who were involved in the events that day, are non-violent.  The group’s only aim was to help publicise climate change and divert car traffic creating an open space in order to raise awareness of the issue of car dominance in the city and its streets.  The event was colorful with a band and singing and held in a light hearted manner. The police violence was totally out of all proportion, unprovoked and unacceptable.

The events highlight the need to reform the Viennese police force, and especially the units involved. All police officers should have clear numbers for identification, so that those breaking the law can be easily identified. Clearly ULAN 3rd Division Group 3 (U33) needs to be disbanded and those involved in incidents of deliberate violence against harmless protestors should be prosecuted.  If this were done the population of Vienna might sleep more soundly at night and the police partially clear their record.  The Gruppenkommandant of BE 8th Division Group 1 and Zugkommandant of BE 5th Division, allegedly involved in complicity in the recorded brutal and shocking event, also need to be investigated. Those guilty of violent acts should be dismissed from the police force, others disciplined, and higher ranks dismissed or at least demoted. There is considerable evidence available for investigators and for prosecution of violent police offenders and those aiding and encouraging them.

Unfortunately, investigations into such incidents in Vienna are conducted by the Viennese police themselves, and not subject to independent inquiry. Indeed, the police officers of U33 were back on the streets for the 6 June protest against the police violence of 31 May. Some 500 officers including EE riot police were present for a peaceful legal demo of about 1000 people; a show of police force apparently intended to intimidate. Several of those police officers involved in the brutal and shocking incident were highly visible, one triumphantly smoking a cigar. Their presence was not only insensitive to the victims of police brutality, but appeared as a message of no apologies and no regrets. Rather than suspending violent officers during investigations, the police authorities put them on display. Amnesty called upon climate protestors not to be intimidated by the Viennese police violence and it’s justification by the authorities. However, legal reform of the police and abolition of violent police units is what is really necessary. The aggressive para-military culture of policing needs to change.

As the world knows, Austria is subject to the influence of and potential control by Neo-Nazis, as reported internationally (e.g., the New York Times article As Far Right Rises a Battle Over Security Agencies Grows). Elements of the police have been involved in unlawfully raiding the offices of their colleagues responsible for investigation into the extreme right, Neo-Nazis and Austro-Fascists.  They stole documents, hard drives and related information on informants and investigations carried out over years.  Little appears to have been done about this, beyond a committee confirming the occurrence of the unlawful acts.

In such times, strong and immediate action against police brutality is essential to prevent the deterioration of society into a violent police state.  Unfortunately, the reaction is too often excuses, claims of justified aggression, denial of events and protection of the criminals in the police force.  Violent and criminally complicit police men and women degrade and dishonour their uniform and their role as servants of the people.  Police officers should not be allowed to forget who and what they serve, and that they are employed to maintain a just, civil, multi-cultural and democratic society, not a white fascist oligarchy or a military dictatorship that harks back to a long dead Emperor.