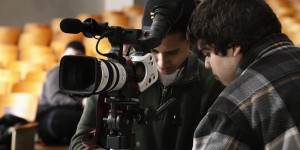 Everyone seems to have a video camera when you give a talk these days, but the quality and results are highly variable.  Well actually not everyone does even mange to do even a bad quality recording. For example, when I gave a plenary talk to 2000 conservationist in a modern 7 story opera house in Montpellier, the lecture received a standing ovation and was followed by a debate, but the organisers neither videoed nor sound recorded the event.  You never can tell what will happen or what will get lost.  An auto-timed video recording of a debate with Anne Pettifor, 2019, cut out before my presentation or the debate even started. Professionals and the well funded do not even guarantee good outcomes.  You can become a bit cynical after getting cut from a programme on environmental valuation by the BBC for not repeating what the director wanted said.  You might become suspicious, after presenting a critique of green growth at an Austrian macroeconomic research institute and after months of inquiry being told the video could not be posted as there was no sound.  You might be even more suspicious when a bank produces a high quality two language video of you criticising environmental financialisation and then refuses to release it due to “internal problems”.  You might be disappointed by having out of focus videos posted of you as if shot from half a mile away.  Then there are pleasant surprises with high quality results from activists, student amateurs, colleagues and University media teams.  Below is a selection of videos covering seminars, lectures and conference presentations (some interviews can be found here).  More videos of lectures and talks can be found on Vimeo where I have been posting and linking items (on and off) for some time click here and more recently Clive Spash on Vimeo where I have been bringing together edited and improved versions (e.g., adding back missing slides).

These are two short commentaries that give some critical reflections on Kate Raworth’s presentation and her approach to economics. The main points concern her ‘vision lacking depth in terms of analysis and causal explanation of the social ecological crises we face, and so resulting in misleading conclusions about what should be done. A fuller account and links to her talk, and other comments on it, is on the public presentations page. The second video here includes a short comment responding to Kate Raworth’s criticisms of ‘isms’ and my comment on her neglect of capitalist structure (five minutes from me followed by two minutes from Aili Keskitalo, President of the Sámi Parliament). Here is a pdf transcript of my comments.

2014 Presentation at Degrowth Conference and Debate with Niko Paech

This was a talk given at the Leipzig Degrowth conference in a session on Scenarios for a Post-Growth Economy, where I presented after Niko Paech and we then had a debate. The talk I gave moves from the basic challenges modern economies confront, due to the biophysical reality that most economists ignore, to the power struggles and political ideologies involved in liberalism and neoliberalism. Along the way the failures of standard economics are highlighted and the illusion of the supposed Green economy ‘solutions’ exposed. I then turn to the challenges facing the establishment of an alternative Social Ecological Economy. The challenge is one that leads to a simple initial conclusion that transformation to a better world will require confronting and defeating the major power holders in society today’s political economy.  Research cannot afford to be limited by what orthodox economists and neo-liberals in the existing power structure argue is ‘practical’, and neither should activists limit themselves to be pragmatic by conforming to the existing power discourse.  Conceptualising an alternative set of utopian visions is a necessary part of promoting the changes needed.

Followed by the debate with Niko Paech.

This was an invited talk given at the University of New South Wales, Sydney, Australia on 3rd March 2010.  The topic covered my paper on carbon emissions trading that had been subject to a ban and censorship by my employer in 2009.  I had resigned about 4 months before this video was shot and the talk was part of a lecture tour of Australia I undertook to publicise the topic. The original recording (external link) lacked the overheads that have been added back. The paper is here and further information can be found on under the climate change research topic carbon emissions trading.

The culmination of my lecture tour  mentioned above was the Climate Summit where environmental activists and their political supporters were meeting.  I was invited to give a plenary talk on emissions trading.  The assembled masses had officially been supporting the governments emissions trading scheme, but at the end of this conference they voted to reverse this decision and come out against it.  There were several amateur camera men and women present and I also gave interviews at the event, but the only video to appear is this one which has a few glitches but which I used to add back the slides. The talk was delayed due to setup problems and I had to go fast at the end, but it provides an overview in half the time of the version above (covering the same material)

Lecture for the Norwegian Ministry of Research and Higher Education, Conference on Biotechnology and the Social Contract, January 2011

Clive Spash on Sustainability Indicators, Environmental Values and Problems with the Capital Approach. Presentation at the Norwegian Ministry of Finance, May 2009