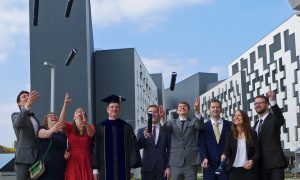 Students of the 2nd Cohort Graduating

Since my appointment at WU, Economics and Business University of Vienna, I have been teaching various aspects of social ecological economics at the post-graduate level both via the M.Sc. entitled socio-ecological economics and policy (SEEP) and through Ph.D. research seminars. The SEEP programme has become a specifically interesting avenue for teaching due to the highly motivated national and international students it attracts.  A core aspect of my role is in providing a foundational understanding of the history and philosophy of science. I then use this in the Environmental Policy option of the M.Sc. to develop a critical social science approach on environmental issues through a seminar course that involves reading, participation, discussion and debate. 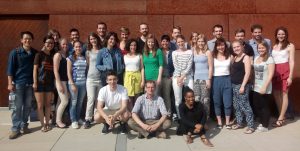 For the final session of my Environmental Policy class, students are asked to prepare a formal debate on a controversial topic previously discussed in class. They must produce arguments why they think a specific statement, or motion, is correct (if speaking for the motion) or flawed (if speaking against the motion). During the debate, students not only have to present their prepared arguments but also counter the arguments brought forward from the opposing party.  Students are randomly allocated their roles so they may well be arguing a position they themselves do not hold, and that is part of the pedagogical value of the exercise.  They need to be as convincing as possible in order to win the final vote from the audience. 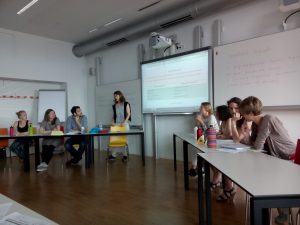 In 2015 the debated motions were: (1) “Individual agents have no power or responsibility to change the economy to a more socially just and environmentally sound system”; (2) “The only realistic option for addressing the environmental crisis is a Green economy based upon popular support, any more radical transformation is doomed to failure”; (3) “Preventing human induced climate change requires strong government intervention to regulate the mode of production”. Four of the student debating teams submitted a one page summary of their arguments for posting on this website.  These can be found by clicking the following links to pdf: Motion 1 arguments Against; Motion 2 arguments For and Against; Motion 3 argument Against. 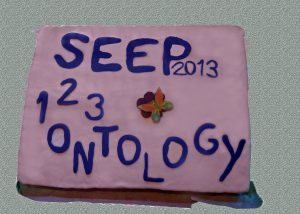 eate a tight social group who benefit from working and discussing together.  They also socialise and organise events. They picked-up on the philosophy of science class and its critical realist aspects with the expression “123 Ontology”, as a group chant. This also appeared on a cake I was asked to cut at a gathering of students from various cohorts organised by the 2013 intake (2nd cohort).