Consultative Institutions: Values and Information in a Changing Society 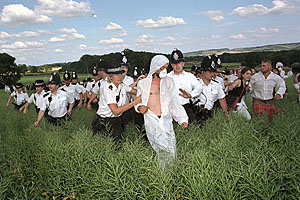 The public are consumers of goods, many of which involve technology. They are also citizens concerned for the welfare of the environment and future generations.

CIVICS used a new food technology, Genetically Modified Organisms (GMO), as a case study. The project explored ways to assess and communicate new technology that would adequately reflect the uncertainties and risks inherent in the use of GMOs. The aim was to find mechanisms that would meet the needs of the public as both consumers and concerned citizens.

Taking an interdisciplinary approach, CIVICS liaised with various ‘actors’ such as members of the public, the Government, and non-government organizations. Covering the debate about GMOs across several European countries, it also looked at non-EU countries including New Zealand, the United States and Canada.

CIVICS was completed in 2003, although elements of the work are continuing, for example in the PATH project.